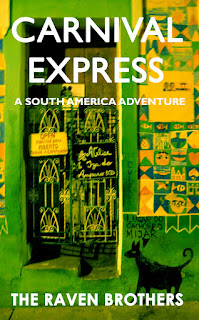 Pioneering a new frontier over the Andes and through the heart of the Peruvian Amazon, the bizarre and the beautiful cross their dusty path as they seek inspiration for a new book and go in search of the ultimate carnival.Not always getting it right, the writing duo tango through the Argentinean vineyards, cycle to the Moon in Chile, lose themselves in the mysterious world of the Inca Empire, swim with caiman in the Madre de Dios, experience panic in the Pantanal, The Rolling Stones in Rio and conclude their journey in Olinda at the carnival of the soul.
A career in overland adventure travel was launched when the brothers coaxed a rusty Ford Sierra across Siberia from the UK to Vladivostok. Priding themselves in going it alone, The Raven Brothers have been noted by Lonely Planet for their talent to portray an “accurate view of what to expect”.
On Amazon >>
You may also be interested in their other books: Living the Linger: Freedom on the American Highway   Driving the Trans-Siberian: The Ultimate Road Trip Across Russia   Black Sea Circuit: An Adventure Through the Caucasus
New book