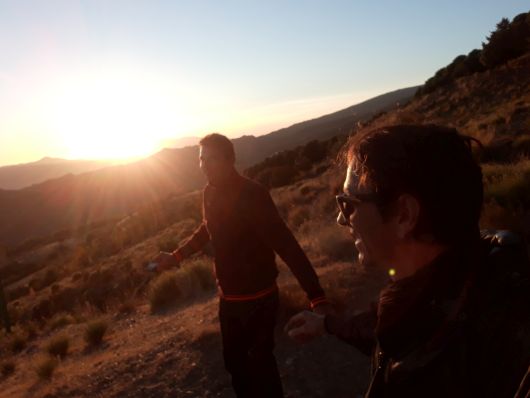 Via de la Plata. Extremadura, Spain. Photo © The Raven Brothers
Enjoy a hike on the wild side? Get travel inspiration for 2021 with three incredible journeys by foot courtesy of The Raven Brothers. The authors of ‘Driving the Trans-Siberian’ became known for overland travel following an 11,000 mile journey across Siberia from the UK to Vladivostok in a rusty Ford Sierra. Exchanging four wheels for foot power, Simon and Chris hit the trail in Norway, Spain and Gujarat in their book 'Hike, Drive, Stayin' Alive!, 10 stories of adventure from across the globe.

Testing The Raven Brothers to their limits, a 75km hike in two days along the Silver Way “Via de la Plata”, transports us to a less visited stretch of Spain’s Camino trail. This ancient Roman trade route between the historic cities of Cáceres and Mérida, winds between deserted villages and through the heart of the Extremadura, a region of southern Spain that is home to the fighting bull.

Simon: The Extremadura is a land of giant skies and spectacular birdlife. Eccentric hoopoes, bee-eaters, golden eagles and even species of vulture occupy the magnificent open spaces. The history of the region is equally mind blowing. We crossed a two-thousand year old Roman segmental arch bridge in the middle of nowhere. I recommend taking a little more than two days to make the hike. We were so broken when we reached Mérida that we agreed never to walk anywhere ever again.

Chris: The Silver Way crosses directly through cattle country. Black Iberian pigs feast in orchards of acorns in the production off Spain’s delicious jamón ibérico de bellota. It was lambing and calving season so new life was appearing everywhere. We hiked the trail in June, as the temperature soars to dangerous levels in the peak summer months. There are very few places to buy supplies so we were forced to carry plentiful reserves of boxed wine. We slept under a tree, lambs screaming in the fields all around us. It’s an experience we are unlikely to ever forget.

Slightly further north than the supposed Nordkapp latitude, The Raven Brothers hike the Knivskjellodden trail to the true extreme northerly point of Europe. On the final stage of their quest to travel the Arctic coast from the famous Lofoten archipelago, the trusty wanderers cross paths with reindeer, traditional Sami people and learn a few survival skills during an Arctic road trip in the midsummer to the top of the world.

Simon: We hiked the Knivskjellodden trail across the Arctic tundra with herds of reindeer cascading down the hillsides, a white tailed eagle with a wingspan of two metres swooped low overhead. We stood looking out across the Barents Sea. It’s amazing to imagine that you are one of only a handful of people stood at that latitude at that hour.

Chris: In northern Norway in the midsummer it fails to get dark. You can hike the coast and forests at two o'clock in the morning. We had very limited supplies with us on our road trip in a small one-letre hatchback. A broken golf umbrella kept us dry and Si wore socks on his hands during the hike, he forgot to bring gloves...

In search of the rare Asiatic lion, The Raven Brothers travel to the heart of Gujarat in India and discover a world where the people live side by side with the wildlife.

Chris: Stumbling across a ploughed field in search of lion kill has to be one of the most terrifying nights of our lives so far. The villages around the Gir National Park are teaming with wildlife, hyena, jackal, crocodile and python. But it’s the leopard (not the lion) the people fear the most.

Simon: Hiking through the brittle Gir Forest in the midday heat we were greeted by gray langur monkeys close to a swamp that is home to a mugger crocodile. The experience of staring into the eyes of a wild Asiatic lion will be impossible to forget.

If trekking isn’t your idea of a good time, fear not, the fifth book by the travel writing duo covers ten inspiring stories of adventure from across the globe, and signals the brothers return to writing “buttock clenching” comedy.

'Hike, Drive, Stayin’ Alive!' by The Raven Brothers is out now! Order your copy from Amazon or your favourite book retailer worldwide. 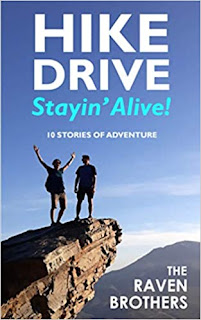