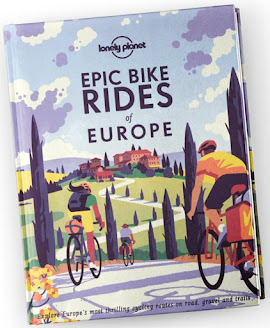 Explore Europe’s most thrilling cycling routes with the latest installment in the Epic series from Lonely Planet.

From dreamy getaways on sun-dappled Mediterranean Islands to challenging alpine crossings, bike enthusiasts share stories from the best road, mountain, dirt and trail routes across the spiritual home of cycling.

Destinations suit a range of trip types and abilities, and each ride features stunning photographs, a richly-illustrated map and a toolkit of practical details so that riders can help plan their own trips. From some of the remotest corners of northern Scotland to mighty mountain passes in the pristine Pyrenees, you’ll explore some of the continent’s least-explored regions, as well as cities including Berlin and Copenhagen amongst many others. Rides feature adventurous bikepacking routes, classic race routes, must-do mountain biking trails, and family-friendly forays.

Guest contributors include author Rob Penn, who cycled around the world in his late twenties, and Ned Boulting, a British sports journalist and television presenter who has reported on everything from the Tour de France to the Vuelta a Espana. So turn those pedals and enjoy the ride to over 50 cycle-loving destinations.

This detailed book is split into sections from

A Traverse of the Provençal Alps France - The White Roads of Tuscany (Italy) - Twice Up The Galibier (France) - Down the Danube (Austria) - The Rocacorba Test (Spain) - The Hope 1000 (Switzerland).

Plus so many more...

Explore Europe's most thrilling cycling routes on the road, gravel and trails.